Let's take a look on history of swing dancing! Starting from the birth, throught the revival, all the way to the present day.

Let’s start with a fun fact that in the very beginning of “swing dancing” this term wasn’t as widely used as it is nowadays. According to Harri Heinila’s research of the term in newspapers and magazines at the NY Public Library database, between 1920 and 1943 “swing dance” or “swing dancing” appears in the search only over 500 times. And jumping forward to the XXI century, between 2000 and 2015 – almost 14,000 results.

Over the years swing dance has been a frenzy of the night clubs and a bridge between African-American and white folks of the US. After the 1940s the popularity of the dance dimmed, only to return in the 80s and blow in full force, conquering the world of happy feet.

Shall we have a closer look at the history of swing dance?

It all starts with jazz music. Jazz started to form during the times of black slavery back in the late 19th century. In the 1900s New Orleans became a home for jazz and blues music, creating the foundation for social dance as well. Jazz dance has its roots in African folk dancing, where people used their whole body to express their feelings through music (unlike the European dance scene with strict frames and isolations). 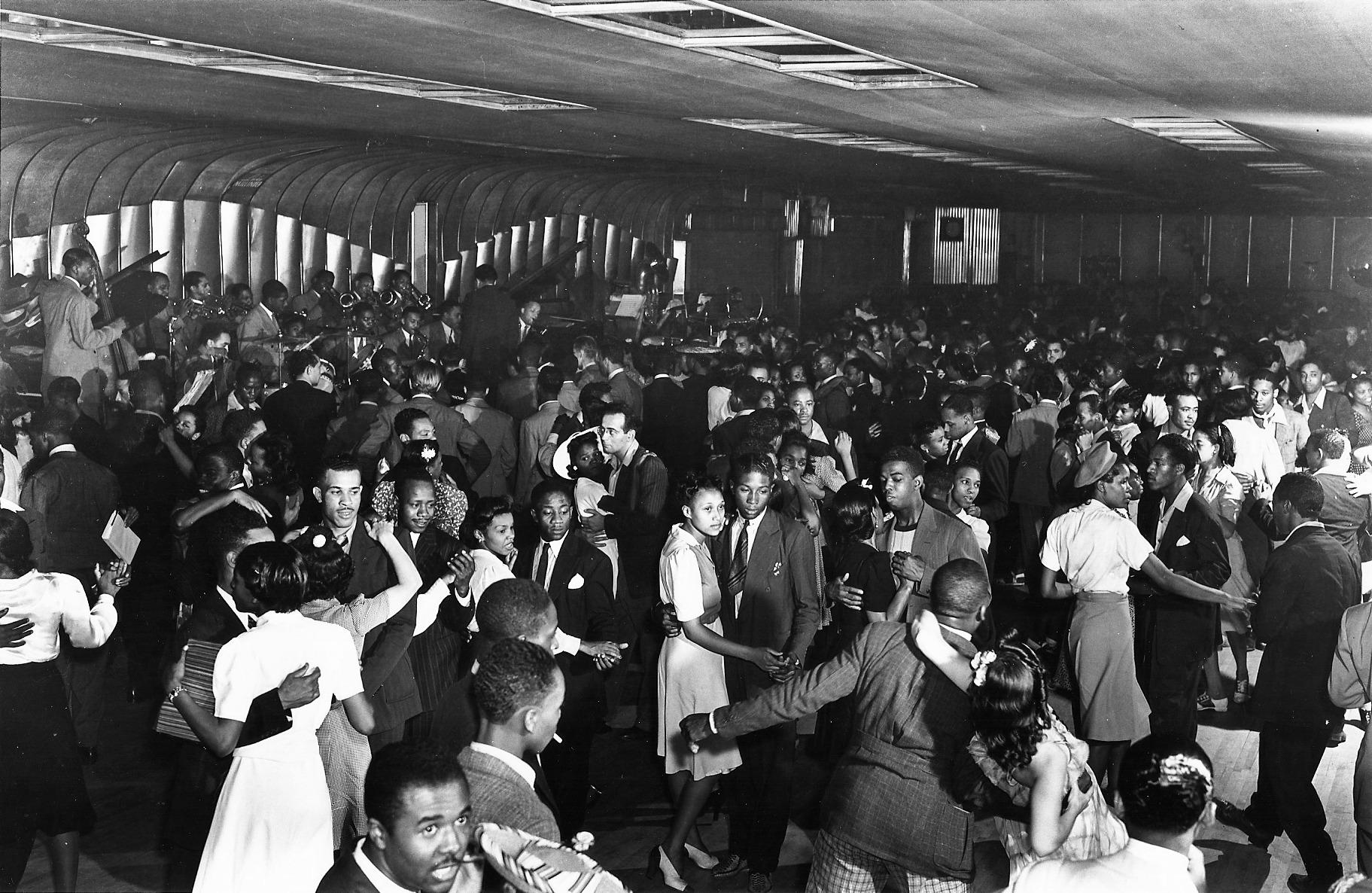 The 1920s are named “roaring” for a reason: nightlife in the clubs was filled with swing bands and dancers, feeding off each other’s energy, sharing the inspiration, improvisation and having friendly competitions, of course.

March 12, 1926, Savoy Ballroom opened its doors in Harlem, NY. It was a large live music and dancing venue: just imagine the coat check could serve 5,000 people a night and yearly visited by 700,000. The wooden floor of “the Track” was changed every three years, and the music was playing non-stop with the two bands facing each other and picking up on the tunes when one of the bands would go on a break. 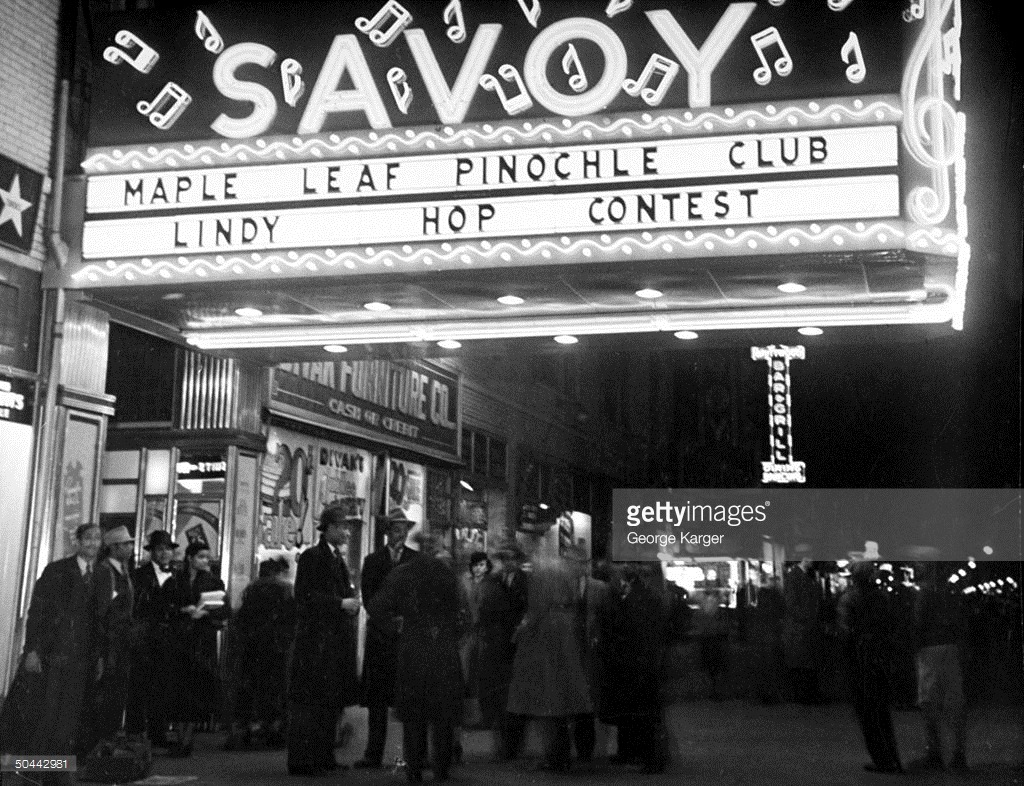 A northeast-east corner – “Cats’ Corner” – was a place where the most talented, ambitious, and bold dancers would jam together and show off their skills. To get a privilege to dance there was fiercely fought for: “an invisible rope surrounded a dancing area that met the requirements of ritual, recreation and performance.” – said Jacqui Malone in her book “Steppin’ on the Blues”.

“Heartbeat of Harlem” also had a strict no-discrimination policy – the only thing that mattered (and probably judged a bit by the patrons) at the Savoy Ballroom was dance.

Finnish swing history class: Finland was no exception of jazz and swing fever. As New York stayed being the centre of swing movement, though radio songs, films and vinyl records, the concept of “roaring 20s” was spreading around the world. As the prohibition law was in power, the restaurants and bars were serving alcohol in coffee cups to trick the officers. Jazz music was played by Finnish and German musicians with their own twist and interpretation, until in 1926 the orchestra from “Andania”ship arrived in Helsinki with a group of Finnish jazz musicians who made a career in the USA.

The first air step (or aerial as we call it now) was created by Frankie Manning and inspired by Big Bea and Shorty George’s move – standing back-to-back with arms locked and Bea lifting George off the ground on her back.

This move gave Frankie the idea to throw his partner at the time Freida Washington up on his back and have her roll over landing on her feet in front of him. They practised for two weeks and had to work out every step as there was no one to teach them. And then…

One Saturday night at Savoy Ballroom’s stand-off between George Snowden’s (Shorty George) and Herbert “Whitey” White’s crews, Frankie and Freida decided to show their new move. They were the last ones to perform – the audience was eager to be entertained by the last lindy couple, clapping the rhythm and cheering on. The moment Frankie and Freida did the step, the audience froze. And then all of a sudden, the Savoy exploded (metaphorically, just so you know).

And that is the story of the first lindy air-step.

(For the dancing nerds, here’s the video where Frankie Manning shares a story about how he and his partner created the first aerial.) 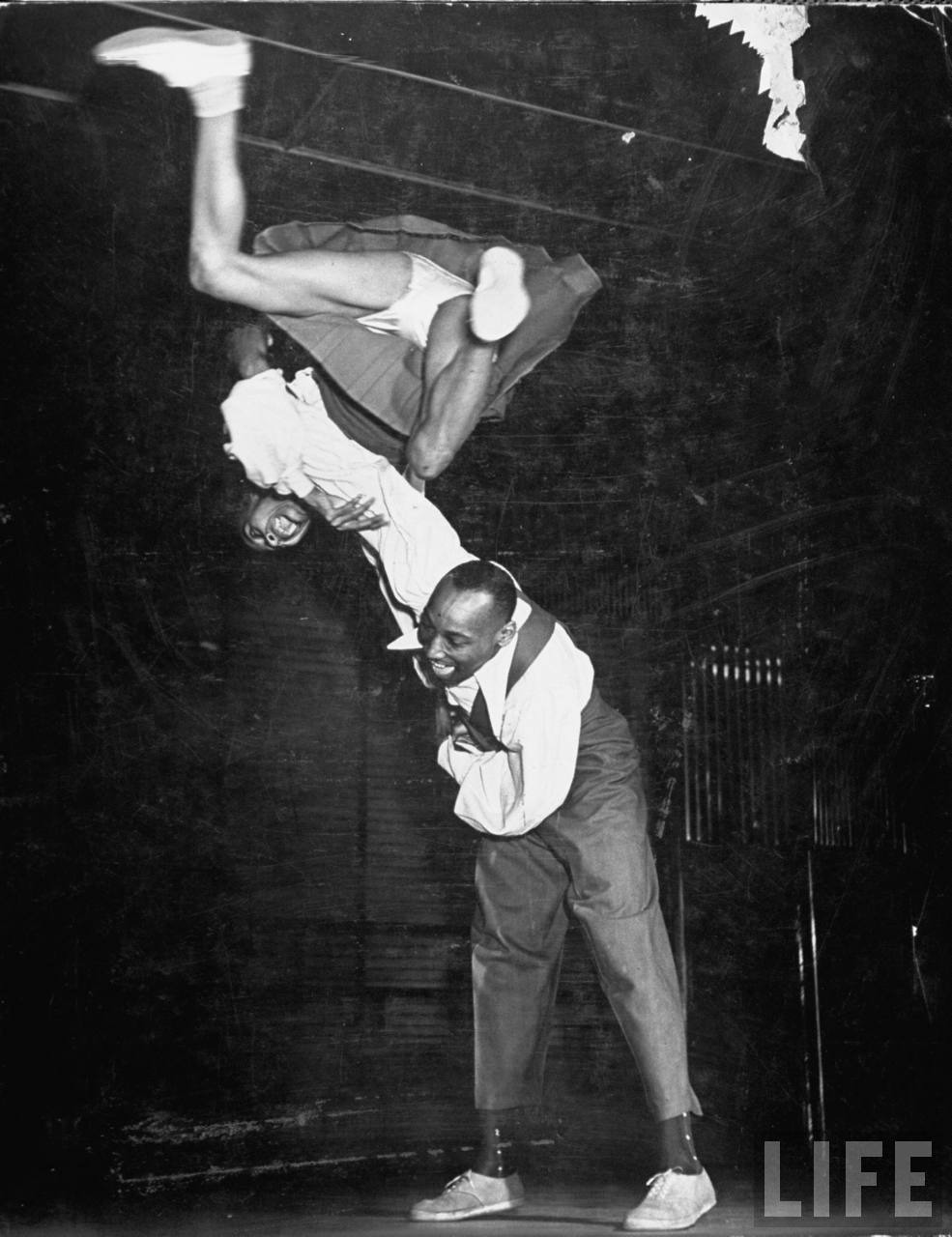 Already in the late 20s, Herbert “Whitey” White started to gather a group of talented dancers around him in the Savoy Ballroom. To name a few names you might have heard – Frankie Manning, Norma Miller, AI Minns, Leon James, Ruthie Reingold, and Harry Rosenberg.

Whitey was dedicated to promoting the dance, and under his guidance the troupes travelled across the US, Europe and Australia giving performances and shows.

By 1936 Whitey’s dancers had officially got their names heard and talent recognised. Swing dancing was at its peak during these years, developed and finessed by young dancers who were practising day and night making a name for themselves. They had a residency gig at a high-end Cotton Club and were featured in several films, for example, “A Day at the Races”, “Hellzapoppin’”, and “Keep Punching”.

The troupes were disbanded in 1942 when the male members were drafted to World War II.

Hollywood films played a big role in swing dance promotion both in the US and Europe. Dean Collins, a dancer and choreographer from Ohio, brought swing to California where prevailing styles were Camel Hop and Balboa. He choreographed and danced in dozen of movies, you can catch a glimpse of him in “Buck Privates”.

Finnish swing history class: in the 1939 Finnish government prohibited public dancing due to the dark times of war. The full prohibition was in force up until 1944, and then still continued under lighter conditions until 1948. There was a possibility to conduct dancing classes, so the dancers took a chance of using them as cover for the small parties. Violation of the ban could result in a prison sentence and the officers were often raiding the party venues.

In 1958 Savoy Ballroom is closed and demolished for housing construction. Other jazz clubs are struggling with new taxes and legislation, not being able to employ big bands to perform live and removing the dancing space by filling them up with tables. Fast tempos are replaced by Cool Jazz with mellow and soft tones, but on the other hand, rock-n-roll is swiping the audience off their feet.

As rock-n-roll music gains more and more popularity, swing dancing gets into the sleeping phase. Derivatives dances influenced by swing are East and West Coast Swing, Jive, Rock-n-Roll and Boogie-Woogie.

These are also the decades when white people are dominant in the dancing scene, westernizing the swing styles with structure and clear form.

Finnish swing history class: In Finland, the swing dancing community was on a rise. Jive became officially a competition dance in 1950, when the dance culture association Terpsikhore started to cultivate swing dancing in Finnish society. Here’s a fun video clip of a Jive competition from Linnanmäki in 1954 for all our dancing nerds to watch.

The swing era was also recreated in the films like “A League of Their Own”, “Malcolm X”, “Swingers”, and “Swing Kids” among others, which created a spike of interest among the audience worldwide to swing dancing once again. 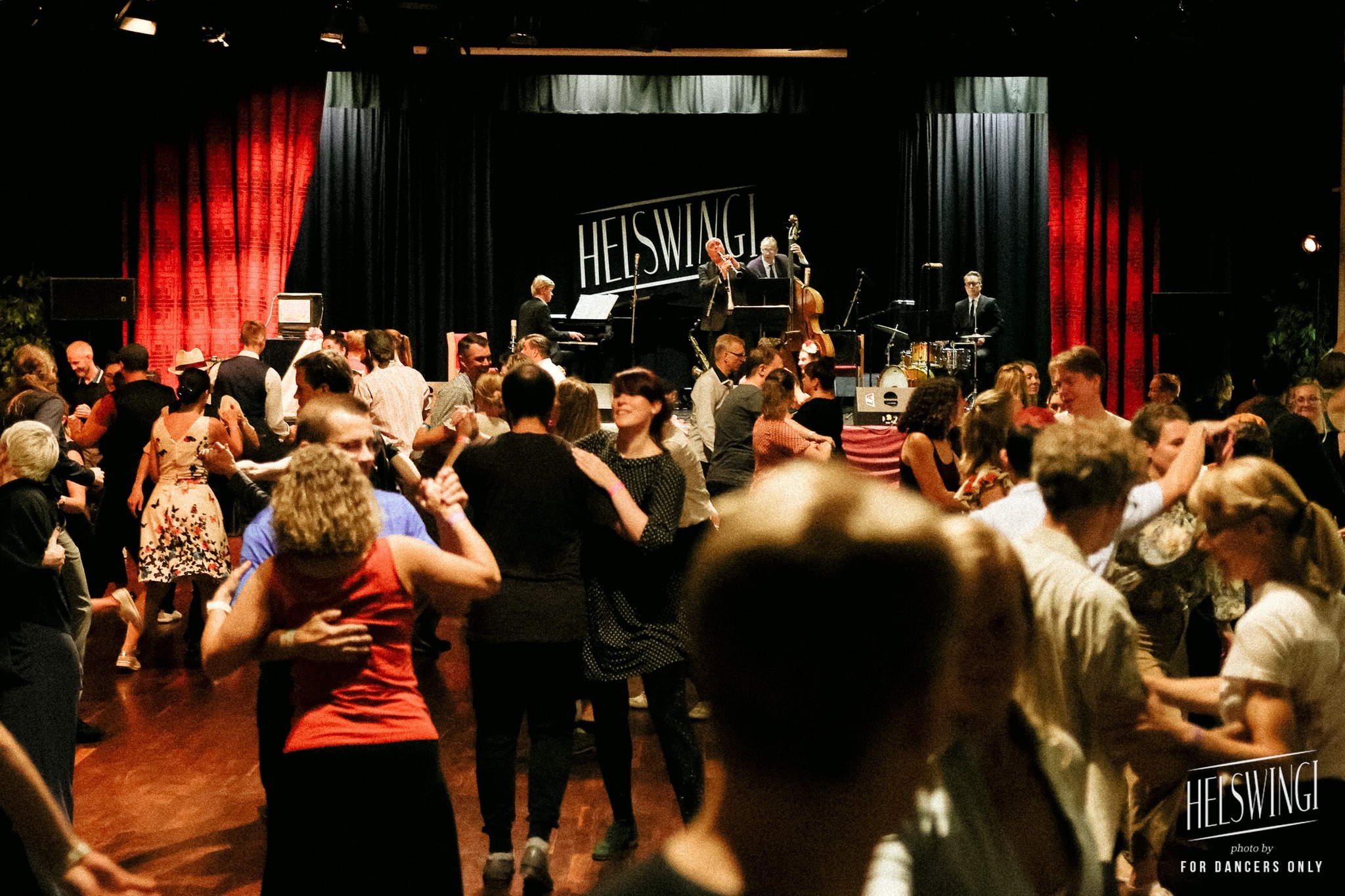 The swing dance community grows every day – would any of the original swing dancers have thought how quickly Lindy Hop and Co will spread around the globe?

A habit of traveling for dancing is something that almost every swing dancer has incorporated in their lifestyle. Whether it’s another city in their country, or the other side of the world! A few swing festivals and exchanges to name are Upside Down in Belgium, Dragon Swing in Poland, Copenhagen Lindy Exchange, The Snowball in Sweden, Savoy Cup in France, International Lindy Hop Championships, Rock That Swing in Germany, and many more.

And of course, we can’t miss Herräng – the most famous swing dance camp in Europe. The camp was first organised in 1982 weeks in a small sleepy village in Sweden (Herräng) and has evolved from 1 week and 25 participants to 5 weeks and 750 participants per week (according to Wikipedia, but this number sounds about right).

Classes, workshops, festivals, and exchanges are creating a space of inspiration and improvisation for dancers of all levels, lifting the moods of mundane, sparkling joy in our hearts, and resulting sores on our feet. And that is exactly what we want, right?

Do you want to be a part of swing dance history? Join the movement – sign up for classes, beginners’ weekends, or just stop by a party to dance your feet away. Check out our website for more information and our Facebook page for the events!

You are not sure if you are Intermediate, Advanced, or in between? We have a simple comprehensive dancing road map that will help you identify your level of dancing.